Edinburgh Fringe 2014 will see the premier of my debut solo stand-up show: BLUE. I can not describe how excited, overjoyed and under-prepared I am. BLUE is a stand-up show like no other. Prepare yourselves! 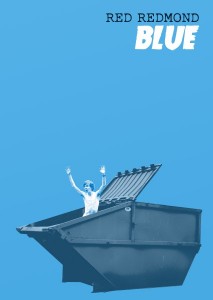 1. A themed show – This is when an act picks a theme e.g. Loss, embarrassement or their dead mum. They then spend the subsequent hour desperately trying to crowbar in old material to clumsily fit the subject.

2. Greatest Hits Show! An hour of the best routines you’ve written over a number of years. Not a bad idea but surely when it comes to next year’s show there will be a noticeable drop in quality.

Instead, I’ve opted for the third option…FUN!

I, Red Redmond, promise to have fun with ever single person who comes to my show. Think of BLUE as a tone. A world where fun is God. Come down and experience a show full of interaction, energy and honesty. We’ll chat, we’ll learn, we’ll draw pictures of cats. Think of BLUE, not as a show, but as a mess. A hot mess of fun and positivity. 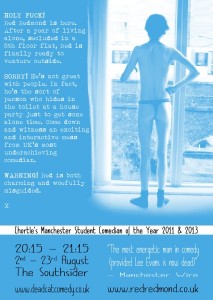 BLUE is the first of a series of shows/messes. Each year I will bring a subsequent colour to Edinburgh. The idea being that if each show is a tone, that tone will change throughout the year. As time passes my perspective will change and as a result my shows will evolve. I plan on doing YELLOW, GREEN, PINK, PURPLE, ORANGE, BLACK, RED and WHITE. So far, YELLOW is favourite for 2015. I plan on RED being my farewell tour. However, all of this is subject to change, who knows how many colours I will do. One thing’s for certain, BLUE is the first of Red Redmond’s infamous COLOURS series.